When it comes to categorizing certain four letter words, it’s safe to say most people feel that debt is one of them. While there are those that argue that some debt is good, like mortgage debt, most Americans would rather have money to put somewhere else. They would much rather spend their hard earned dollars on fun stuff like vacations, or put money into savings & retirement rather than their debt. But in reality, if we want to have a house to live in or a car to drive, it is not surprising just how many people are in debt in the US. Unavoidable or not, going into debt is borrowing from our future, and many are feeling the sting of their past decisions today. In fact, about 13% of Americans expect to be in debt for the rest of their lives. Alas, debt is all too common in America.

What percentage of Americans are in debt?

Just how many Americans are in debt? According to financial experts, the percentage of Americans in debt is around 80%. 8 in 10 Americans have some form of consumer debt, and the average debt in America is $38,000 not including mortgage debt. Owing money just seems to be a way of life for Americans, as collectively we have $14 trillion in debt. That amount is climbing ever higher. Consumer debt can be broken up into 4 main categories: mortgage debt, auto loans, student loans, and credit card debt. Unpaid medical bills and expensive medical costs are quickly contributing to debt that Americans currently carry.

What is the biggest debt in America? 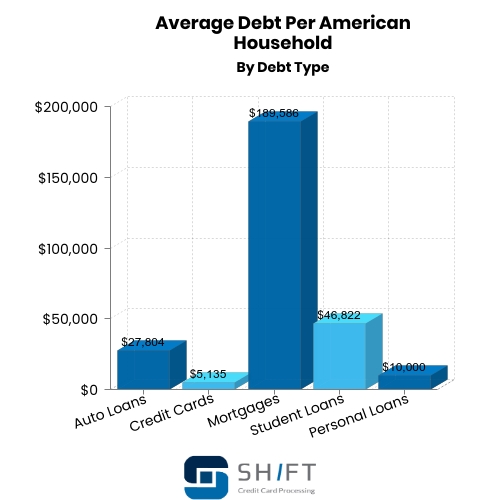 A study done on budgeting done by the Bureau of Labor Statistics reflects that mortgages & housing are our biggest expense. The most recent numbers from their study show that 33% of our monthly income is going toward housing - which includes mortgage repayment, utilities & bills, repairs & furnishings.

However, the largest debt you have can vary by age group and stage of life. For example, people who are younger than 35 have, on average, about $67,400 of debt. The majority of their debt is made up of credit card debt and student loans. But as we look at age groups as they get old and consider their stage of life, it makes sense that mortgage debt would be the main source of debt for households 35-44, as many people buy houses and start families. The most common reasons Americans go into debt are medical costs, home improvements and having children. Indeed, there is a cost to having children. In fact, about 37% of couples are delaying having children and starting families until they get established financially & get most of their debt paid off. They fear the additional debt that having children could add - including loss of income from time off work and paying for daycare until the child reaches school age. The average costs associated with raising a child from birth to age 18 in America is $250,000, or $13,889/year, which include housing, food, & education. Adding children to the family also includes cost of medical care, which is increasing faster than our income is. Unpaid medical bills and the resulting accumulation of debt is a rising trend among Americans. Some Americans are paying for insurance AND their expenses out of pocket until their deductible is reached. This is even true with people with insurance, as some plans have very high deductibles. 62% of people who have trouble paying their medical bills report that they had health insurance at the time treatment started.

Medical bills can get incredibly expensive and add up quickly, especially if it is the result of an emergency or accident.   40% of Americans report they could not cover an unexpected expense of $400. And indeed, 15% of Americans are in medical debt of at least $10,000.

The rising cost of medical expenses is outpacing income growth. The analysis of the past 10 years has shown that medical costs have increased 33% while income has only increased 30%.  Though the powers-that-be are trying to change healthcare, many families are feeling the burden of unpaid medical debt. The average cost of medical care per person in America is $5000/year, which has doubled since 1984 (after adjusting for inflation).

The cost of higher education is dramatically increasing as well. The median debt of students who either attend or graduate college with an undergraduate is $49,000. Forty million Americans have student loan debt, and 14% of those owe more than $50,000. The percentage of Americans with student loans who default is at least 28%.

In our personal financial statistics article, we were able to see that if we look at income & ethnicity, Asians have higher incomes, on average, than any other races. The average income of Asians is $81,331 / year.. If we look at student debt, by ethnicity, we see that Asians are right in the middle when it comes to what they owe for their education. 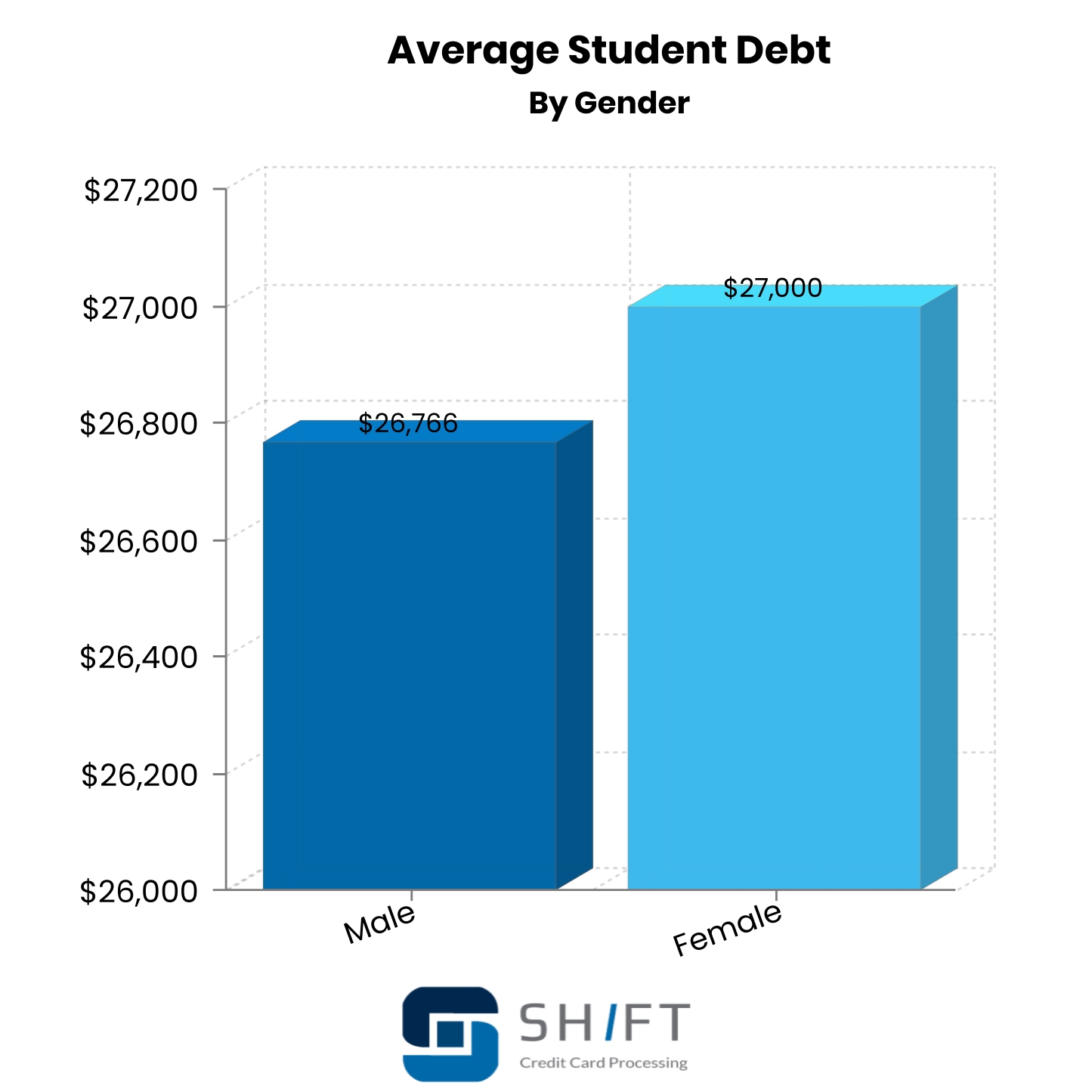 And while males tend to earn more money than females, females have more student debt on average than their male counterparts. Regardless of age, job type, industry, or seniority, men tend to earn $11,791 more than women on average. Below are more examples of where the average debt exceeds the average income. On average, they owe more than they make. The Costs of Being in Debt

Indeed, going into debt is borrowing from your future. Some debt can be considered “good.” Mortgages or student loans can be used to build your credit score and establish credit history. However, bills can pile up fast and then you can find yourself stuck in a cycle where the mountain gets ever higher and harder to climb.

The more debt you owe will cause less available cash to pay for other things or save for an emergency. There’s a reason why it’s important to do your research and make a plan before you incur more debt. Will your college degree get you into a career that will worth what you paid for it? Will you be “house poor” after you buy a house you thought you could afford, only to realize too late that all the additional costs of owning a home leave you strapped for cash? Will the lack of cash prompt you to use a credit card or get a personal loan, going ever further into debt? Debt leaves us with less disposable income and more obligations.

We can’t talk about debt without talking about budgeting. As we see the amount of money we owe grow and grow, we must ask ourselves - where is our money going? Most Americans couldn’t really answer that question - only about 1 in 3 people keep a household budget. What’s more alarming is that almost half of US families report living paycheck to paycheck. Sadly, 19% of Americans also report that they have $0 set aside to cover an unexpected financial emergency.

There are several factors to consider when looking at your personal budget. The first step is to see where the money is going. According to a survey done by Northwestern Mutual, almost 40% of our income is spent on discretionary spending. Our spending habits indicate that almost half our money on things such as dining out, nightlife, entertainment & hobbies. While there is nothing inherently wrong with spending money on these things, we are treading dangerous waters when we continue to live beyond our means and spend money we don’t have.

The problems with debt in the US will only continue to rise as more people are spending beyond their means. While some debt might be unavoidable, there really is no reason to keep up with the Joneses.

You can be free from the burden of debt, just start with a simple written budget. Look at your bank accounts, add it all up and actually see where your money is going. Really look at the reality of your situation, and don’t be afraid to make changes.

If you’ve never learned how to budget, it’s time to start now. You can regain control of your finances. Ask around, find resources at your local library or church, or even search YouTube for budgeting ideas. There are tons of ideas out there on how to manage your money.

Stop reaching for the credit card. Start budgeting, build up an emergency fund, pay back debt (and don’t incur more of it!) and save for non-regular expenses. Start saving money - cook at home instead of eating out, shop second hand, take a stay-cation

Don’t become a statistic and get stuck in the spend and borrow cycle. It will take hard work. It will take sacrifice. But your future self will thank you when you’re finally debt free.